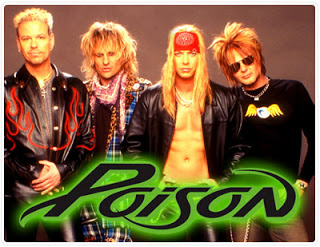 In the post, How Women Kill, we saw that women are sixtimes more likely than a man to kill with poison, not Poison, the 80s hair band featured here. I had to post that pic. How could I not? Look at them! They’re like something aliens would keep as pets! Aaah, the 80s.

But, I digress. As often as poison is used to incapacitate folks in literature and real life, I thought we should discuss it a bit. We will look at some of the most common poisons, toxins and venoms and what they do to the human body. For the purposes of this post, I will sum them all up with the word, “poison.”

Before we jump too deep here, let’s look at a few medical terms that are often encountered when examining and writing about the symptoms and treatment of poisoning.  I ran into these words during my research and you might as well. Remember, using technical terms in your work can take your reader out of the story. Be sure that you show the definition of whatever medical jargon you use. Don’t kill your reader with “jargon-monoxide” poisoning. 🙂 I didn’t make that phrase up. I wish I had!

Toxins vs Poisons vs Venoms – We sometimes use these words interchangeably but they are not the same. A toxin is a biologically produced chemical that produces an immune response in the body. Both poisons and venoms can be toxic but poisons and venoms differ from each other. Poison is secreted by animals such as poison frogs. A venom is injected by an animal. The site WideOpenPets.com describes it best: if you bite it and you die, it’s poison. If it bites you and you die, it’s venom.

Antibody – An antibody is a blood protein produced in response to a foreign or toxic substance in the body.

Antitoxin – An antibody used to counteract the effects of a toxin/poison.

Antivenin – Fist of all, did you know it’s “antivenin” and not “antivenom?” The latter is actually two words: anti venom. Antivenin is a blood serum containing antibodies that counteract the poison/toxin delivered by animal life such as spiders, scorpions and snakes.

Arthralgia – Pain in the joints is arthralgia.

Blood poisoning – This is not actually poisoning. Don’t confuse it with such. Septicemia aka blood poisoning occurs when bacterial infection from elsewhere in the body enters the blood stream. You can’t poison a character and give them blood poisoning.

Bradycardia – A slow heart beat is bradycardia. If it happens a bunch of times it is bradybunchcardia. 😉

Charcoal – When poison is ingested, the protocol of care may be putting activated charcoal in the stomach. The charcoal absorbs liquid contents of the stomach.

Cutaneous – Cutaneous relates to the skin.

Cyanosis – Like the color cyan, cyanosis refers to a bluish color in the skin. It is a result of low oxygen levels in the blood.

Diplopia – Diplopia is blurred vision not a type of dinosaur, which is totally what I thought it was. So help me, I saw one in Jurassic Park!

Disseminated Intravascular Coagulation – This is a condition in which small clots of blood form in the bloodstream. I don’t know about y’all, but the word “clot” just grosses me out.

Emetic – Something that makes you vomit is an emetic. On that note, nauseated is a verb. Nauseas is an adjective. For example, the thought of watching Mama Mia nauseates me. (Sorry, it’s true.) If I watch it, I am sure to become nauseas. (For the record, I love ABBA.)

Encephalopathy – A disease in which a function of the brain is compromised by an agent or condition like a viral infection or toxin.

Gastric Lavage – Pumping out the contents of the stomach is knowns as gastric lavage. Sounds like a fancy treatment at a holistic spa. But if one is offered to you, do not add it to your spa experience!

Intubation – Insertion of a tube in the body to aid in breathing is intubation.

Myalgia – This is a fancy word for muscle pain. It also sounds like something a doctor would say while swearing. “Oh yeah? Well, you can kiss myalgia!”

Myoclonus – Spasmodic and jerky contractions of muscle groups are known as myoclonus.

Opioid – Because opioid use / abuse is more prevalent, and I will be including fentanyl in another post, I wanted to explain exactly what an opioid does. An opioid is analgesic (pain reliever) that binds one or more opioid receptors in the brain. They block pain, slow breathing, calm the person in pain and act as an anti-depressant. The body produces a natural type of opiate on its own. However, it does not produce enough to combat chronic pain. Nor does it produce an amount that causes addiction. Prescription opiates are incredibly addictive. You brain actually learns to want synthetic opiates.

Paresthesia – This is a tingling, pin and needles sensation caused by damage to peripheral nerves. It’s kind of like the feeling you get when your hand or foot falls asleep.

Pulmonary Edema – Fluid in the lungs in pulmonary edema.

Syncope – A temporary loss of consciousness caused by a sudden fall in blood pressure is syncope. It is also a word that sounds like “sink of pee,” which reminds me of the time one of my very young children peed in the bathroom sink as an April Fool’s joke. And, they did so in May. Their thinking was that it was an even bigger April Fool’s joke since it happened long after you’d expect it.

Toxicology – The branch of science concerned with the nature, detection and effects of poison.

Toxicology Report – Issued in forensic toxicology testing, the toxicology report states what sort of toxin as well as the amount of it was found in a body post mortem.

In our next post, we will look as a few poisons and their effects on the body. Now, I leave you will one of the best poisoning scenes ever. In Poison, Pt 2, we’ll look a little closer at this scene and the dreadful iocane powder. Until the next round at FightWrite.net, get blood on your pages! Oh, also, NEVER GO AGAINST A SICILIAN WHEN DEATH IS ON THE LINE! Or dessert. My best friend is a Sicilian. Trust me on the dessert thing.