Judo for the Pandemic

Home » Uncategorized » Judo for the Pandemic 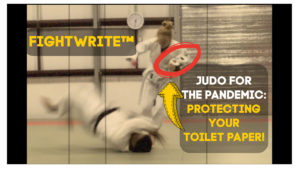 It stands to reason that the present pandemic will be the setting for future books. As that is the case, I thought this little video might help your character weather the viral storm. Enjoy!

Writers, as you watch, don’t get bogged down in the tiny movements. In one throw I note a foot sweep because it is hard to see not so that you can insert that into your work.

So, what should you note in videos like this? Large movements. And, you may have noticed that I didn’t include the names of the throws. I will explain why later. For now, focus on gross body movements. Imagine what parts of the throws can be shown in a comic book panel. Include those movements with only as much description as necessary because more important than the action is the physical result. Even in a judo competition, points are not scored on the difficulty or speed of a throw. Points are scored based on how the thrown body lands. On that note, not all throws happen quickly. Sometimes the body kind of hovers for a moment. I love those throws the most because half the spectators hold their breath while the other half oohs until physics makes up her mind on what will happen.

In my book, Fight Write: How to Write Believable Fight Scenes, I really do quote coach Zach a couple times. Once, while writing the book, I told him how authors often get bogged down in the technicalities of a fight scene. He said, “Set up the action. Describe the reaction.” In other words, give readers the situation, a basic idea of how bodies are positioned, and put the greater focus on the sensations of the aftermath.

Here is the throw I performed on sensei Zach:

Before Carla could gasp, Zach was on her. He took hold of the pack of toilet paper Carla held close to her chest and pushed. The crinkling plastic on the rolls held her weight for just a moment. Then, with a rip, it gave way.

Carla reached out for balance, putting her arm around Zach’s waist. Her body turned with a backward lean, jutting her hip out between them. Zach continued forward with a violent press, his arm still outstretched.

With that final push, Zach’s shoes lost their hold on the cement with a gritty shish. His chest fell forward, his legs flew up.

The dust on the pavement hissed as Zach’s feet lost their hold on the sidewalk. His heavy chest fell forward, his legs flew up.”

Ok, here we have the action all set up. Not once did I mention that I did a floating hip throw – uki goshi. All we know is that my arm is around Zach’s waist, my hip is between us and Zach’s top heavy frame pulled him forward. You can’t tell because of his gi, but Zach is very thick through the chest and shoulders. His center of gravity is high and that is the case with most men. Because of that, he, and men and general, are, from a physics standpoint, easier to bring down once you disturb their equilibrium and bring their center of gravity forward. In this throw, Zach’s thick top half is his undoing. Now, I’m not saying men are easier to throw or takedown. I’m saying from a physics stand point, if Zach’s center of gravity were in his hips or legs, he might not topple so easily*. I go more in depth into this in chapter three of my book.

Now that we have set up the action, let’s get to the reaction.

Zach’s face hit the pavement with a sharp slap and the air in his chest chuffed out as his weight crashed down. At the sound of a snap, he cried out and rolled to his side. His right hand angled in sharply. His thumb laid against inside of his arm.

Zach cradled the break and rolled side to side. Spittle flew out in tendrils from between his gnashing teeth as he hissed in pain. A dark stream of blood ran from his forehead down the side of his face and into his thick tangle of curly hair. As he rolled back and forth the blood splodged the sidewalk with inky blots.

If you read this scene in a book, what would stick with you more: The hip throw or Zach’s reaction to it? My guess is the latter. You know why? I will tell you in the next post. There really is a biological reason why the result of that throw impacts you mentally more than the throw. I will also explain why I didn’t label the throws and point out a few things you may not have noticed in the video.

Wash your hands, writers. Be safe. Eat well. Rest a lot. Call somebody. Write something. Create anything. Hug when you can. Send a letter when you can’t. And not just during this tough time. All the time.

Until the next round at FightWrite™.net, get blood on your pages!