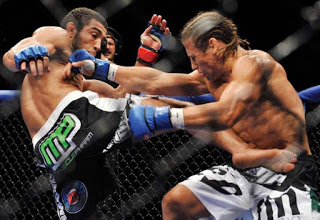 In order to describe a stupid kick, I need to explain a smart one. A proper kick makes contact on the fleshy portion of the shin on either side of the bone aka blade. To do that, you need to make an up chop or a down chop by turning the hip over. In both cases, you try to kick all the way through the target. The leg is basically a bat and

you don’t stop the bat once you make contact with the ball.

In all kicks with horizontal power, the hips have to torque. The harder and faster their rotation, the faster the kick is propelled. Upon contact, the body of the kicker should be sideways because knees and hips should always go in the same direction. If they don’t, not only will you lose power, but you will tear up your back and knee.

Unless you are a seasoned fighter, you do not want to make contact with the top of the foot. After years of training the feet toughen up both in bone density and muscle strength. But, unless made stronger, bones of the feet, like those of the hands, are fragile. If foot bones take the impact they will break or the muscles between will be damaged.

hard, it can break and it is absolutely gross. Even if you are a seasoned fighter, it can break. If you are lucky enough not to break it, the pain alone will shock you. I’ve accidentally “clicked” shins, as I call it, with another fighter on a few occasions. The pain made me nauseated. And, we weren’t even going hard.

The only exception to to that are Muay Thai fighters. They are the exception to a whole lot of rules including those of Science! They are better able to use their shin blades because they have tempered them. They roll bamboo canes up and down their shins and hit them as well. Over time, that friction and impact creates calcifications on the bones making them thicker and harder. So, unless your combatant has done tempering, that bone could break. (Even with tempering, it can. It’s just not a good practice.) A broken shin on a battle field can mean certain death. And, if the bone comes through the skin, infection could set in. Depending upon the time period of your story, that can be a mortal wound.

I’ve attached a video of Muay Thai shin tempering as well as a kick gone horribly wrong. It’s gross. You’ve been warned. It’s MMA champion Anderson Silva who landed a kick on the blade. Even with the tempering his shin has certainly had with training through the years, Silva’s power proved too powerful for his own bones.

Muay Thai shin tempering. MUTE IT!!! I show this to help you understand how seriously fighters take their art. The work isn’t just cardio and technique. Sometimes, it’s just abusing the body to toughen it up and they do it willingly. Again, mute this.
And, the Silva video in both real time and slow motion. I’m sorry and you’re welcome.
Somebody please put this in a story! If you don’t follow MMA, you can’t appreciate how amazing Silva is. Without question, he’s one of the greatest to have ever walked into the cage. This fight wasn’t only shocking for the manner in which he lost but the sheer fact he lost at all! I saw this live. Ugh.