Blades and Their Purpose Part I – Single vs Double Edge

Last week we looked at knife vocabulary. This week, we’ll look at single versus double edge knives. What is the difference and why would one choose one or the other?

First, as we saw in last week’s post, a knife’s edge is the sharp side of its blade. So, a double edge knife still only has one blade. Wolverine’s blades are all single edge. The knives in your kitchen and any that you carry likely are as well. And, there’s a reason for that. You’ll see why at the end of the post.

I reached out to Kirk McCune for information on this. If you don’t know who Kirk is, he’s a blade Jedi. He’s reached the rank of Master in Giron Arnis Escrima/Bahala Na and is as knowledgable as it gets on all things stabby. I had the opportunity to talk with him once about swords and every question that I asked he not only knew the answer to but improved my question. So, he made me smarter on both ends. 🙂 He’s a kind, humble guy. You’d never know he’s as lethal as he is.

Here he is teaching in Germany. He’s the guy on the left in the thumbnail.

Kirk said that like any tool, the knife is best for its intended purpose. Double edge blades, like Renaissance daggers, are excellent for fighting in close quarters against combatants in protective garments that preclude slashing. The only means of attack is a straight stab and with a double edge you cut with both the push and pull. Also, double edge is notoriously difficult to disarm because there’s no safe place to grab, push or leverage on the blade. In other words, it’s harder to take a double edge knife away from someone.
As basic tool use, Kirk has seen folks using double edge as field knives. They sharpen each side a little differently to do a different type of task: one for cutting fine work, the other for rough work like chopping logs.
The advantage of a single edge is that it allows for techniques that 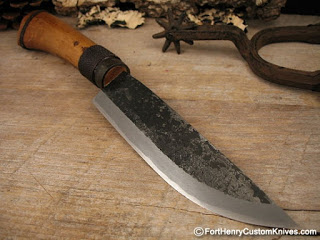 place the blunt edge against your body. For example, you can conceal the knife in a reverse grip (think ice pick grip) without worrying about having an edge next to your forearm. That’s not to say that you can only use reverse grip with a single edge. But if you are going to conceal it behind your forearm (which literally places the blade on the underside of your arm) it’s best not to have that vulnerable part of you against something that could cut it.

In sword work, the unsharp, back side of the blade is used to block and parry which spares the sharp edge. It’s also used to smash through an opponent’s defenses. This makes the sword a multi-purpose tool while still sparing the edge.

Tool use for single edge allows for many camp tasks like batoning firewood where you pound the knife through your firewood with another piece of wood as a hammer. You can also place your hand on top of the knife on one side if the task calls for it.
Lastly, and this is why you likely don’t have any double edges around your house, single edge knives are legal to carry in most states whereas double edges may not be. There’s many opinions on why this is the case but it could be that double edges are considered weapons because of their military uses. You can own a double edge. You just can’t carry it.

Some blades, like the Bowie, are “double edge-ish.” They have a partially sharpened backside. This gives some qualities of both the dagger and a single edge. This sharpened swedge (that’s what it’s called) of the Bowie knife allows for a deadly back cut which, in Bahala Na, is known as a tip rip.

Ok, lets sum that up:
Double edge – Designed to pierce which is great when slashing isn’t possible. You can cut on two sides with the push and pull. Difficult to disarm. However, there are two “live” sides to the blade which might inhibit some fighting techniques and makes utility use a bit more perilous. Illegal to carry in a whole lot of states in the U.S.
Single edge – Great for slashing and can be physically handled more safely. As such, it is has wider utility use. It can be used for stabbing but it is not as efficient as a double edge for that task.
Double edge-ish – Best of both worlds but keep in mind that you must be mindful of where you touch the back of the blade as half of it has a sharp edge. The edge type may be legal to carry, but most states prohibits blades over a certain length. Bowies tend to be around 8″ which is too long almost everywhere.

There are handling differences between the two which you should know to make your character’s movements correct. Because a single edge blade only has one sharp edge, you can only slash with one side. So, in order to slash in different directions, you will have to turn your wrist over. For example, if I am attacking the neck on both sides I will have the top of my hand away from the body for both cuts. If I’m holding the knife in a reverse grip (icepick style), the turn in my arm will be more dramatic. So, in one direction, the wrist and forearm will be more vulnerable. Your character can cash in on that!

And, finally, I’m sorry to diss on daggers, but y’all, quit just giving your character a dagger. Yes, they are easy to obscure up the sleeve of clothing (but I wouldn’t) and are light, BUT they have fewer utility uses. With a single edge, you have a multi-tool that can still kill. Or, as Doug Marcaida would said, “keel.” If you absolutely must, must, must give your character a dagger, I suggest they have a single edge on their person as well. Just makes sense.

Next week, I will finish up this little knife series with blade shapes, a bit on hiding your knife and why keeping a dagger up your sleeve isn’t as easy as the movies make it seem. But, the Stabmaster 2200 is every bit as easy to use as this video portrays!