Knife Vocab and a Great Video!

All weapons look as they do for a reason. That includes knives. Occasionally you will find some that have little additions here and there that are simply for the sake of looking awesome. Mostly, however, every tiny bit serves the purpose for which the blade profile, or shape, was designed. And, yes, different blade profiles serve different purposes. I will address them in another post.

It’s important to know the parts of a knife if your character regularly carries one. I advise against using technical words in your work but you personally may need a reference as the scene plays out in your head. Also, if you are creating an original knife, it will still need some of these features to be both a viable and safe weapon to wield.

Here’s a few diagrams. Each shows something a little different and none show all the vocabulary words I’ve provided.  After the vocabulary is a video you absolutely should watch. Even if your book doesn’t include anything sharp, the video is great and makes me happy inside. 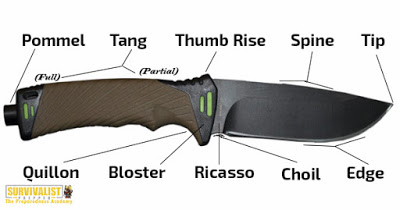 These definitions are courtesy of Oso Grande Knives and Mercer Culinary. This is not an exhaustive list. If you are a knife aficionado and feel there are terms that should be added, feel free to put them the comment section and I will add them to the list.
Belly – The belly is the curving part of the blade edge. Bellies enhance slicing and may be plain or serrated. One note, the point of the knife becomes less sharp the larger the belly is. When choosing a knife you should decide whether penetration or slicing is the most important, and keep the design of this part of the knife in mind.
Bevel – The bevel is the sloping area(s) that fall from the spine towards the edge and false edge of the blade.
Bolster – A piece of metal, generally nickel silver or stainless steel, that is located at one or both ends of a folding knife handle.
Choil – The choil is the unsharpened part of the blade. It is left at full thickness like the blade spine and is found where the blade becomes part of the handle. Sometimes the choil will be shaped (An indentation) to accept the index finger. It also allows the full edge of the blade to be sharpened. If a guard is present, the choil will be in front of the guard on the blade itself. The choil is often used as a way to choke up on the blade for close-in work. The index finger is placed in the choil, and this close proximity to the edge allows for greater control. In addition, the choil is just in front of where the blade itself becomes part of the handle, an area often prone to breakage due to the blade-handle juncture. The choil leaves this area at full thickness and thus stronger.
CombinationEdge – Blade that is partially serrated, partially plain edge.
Edge – This is the sharpened side of the blade. Blades will have a single or double edge (or dagger style) depending on the design.
False edge – Also called a swedge (non-sharpened), it is a ground edge on the back of the blades spine, that is non-sharpened. It removes weight from the blade and can change the blades balance and penetration performance and appearance. Widely used on military and combat fighting knives, a false edge blade is an additional bevel on the back of the blade enhancing the blade’s point. This edge can be sharpened or not. The false edge can also be used for heavier cutting that might be damaging to the cutting edge.
Finger guard – Often considered part of the bolster, the finger guard strengthens the heel of the knife, provides additional weight forward of the hand and protects the finger from slipping across the blade.
Fixed Blade Knife – A knife that is solid between the handle and the blade.

Folding Knife – Any knife that allows the blade to be folded into the handle. 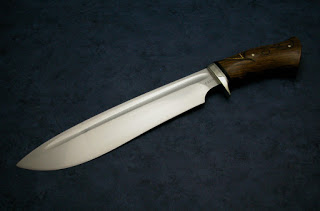 Fuller – A groove that lightens and stiffens the blade. Also known as a blood groove, though the term is inaccurate.

Heel – The part of the cutting edge farthest away from the point. It’s most efficient for making quick, coarse cuts and jobs that require strength or pressure.

PlainEdge – A sharpened knife blade with no serrations or teeth. Sometimes called a smooth blade.

Point – The tip of the blade.

Pommel – The knob or expansion found on the of end a sword or knife.

Quillion – A handguard protruding from both sides of the handle (where the handle and blade meet), which stops the hand from slipping up onto the blade. The most protective part of the guard.

Ricasso – The ricasso is the flat section of the blade between the guard and the start of the bevel. This is where you will most often find the tang stamp or an imprinting that can show style number, collector’s number, manufacturer’s name. Thumb Ramp/Rise. A point or crest on the blade spine that creates a spot where the thumb is placed and offers leverage while holding the knife and cutting also referred to as a spine cusp.

Serrated Edge – Serrations are a set of “teeth” or notches on the back or front of the blade to aid in cutting. Also referred to as a “Wavy Edge”.

Spine – The unsharpened edge of a blade opposite to the cutting edge, also known as the back.

Tang – The portion of the blade where it connects to the handle. If it is completely embedded in the handle and out of sight, it is a “hidden tang.”

Thumb Ramp/Rise – A point or crest on the blade spine that creates a spot where the thumb is placed and offers leverage while holding the knife and cutting also referred to as a spine cusp.

Now for the video. I love it because it shows several things that MUST be shown in your knife fight scene. 1. Everyone gets cut. I can’t stress that enough. EVERYONE. 2. Knife fights aren’t just knife fights. They are physical confrontations as well. 3. Real knife fights have no whatifs. They are fast, high energy and random. You don’t have time to think or consider the right response. As Saulo Ribeiro said, “if you think, you’re late.”