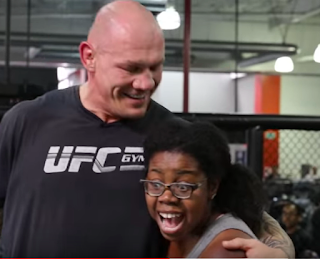 Disparity between combatants is the most common issue that authors present to me. Either one combatant is larger than the other or of far greater skill. I will tell all of you as I do them: there’s no magic formula for leveling the playing field. Even if there were, a level playing field isn’t the same as a favorable gradient.
A difference in size is generally what I hear about most. Being the smaller fighter is seldom better. Me saying that tends to surprise people as I am a small person. I think they assume I will tell them that my build is QUEEN. Smaller is better! Little ninjas, rise up!!!!!
Fact is, that’s just not the case. However, there are ways to make the most of a smaller size. Every trained fighter makes the most of what they are. You can read all about that in my posts on size disparity. There are two. There’s this one.  And this one.
As sub-optimal as it is to be the smaller opponent, a disparity in fighting ability is a far greater gap to bridge. It’s not impossible. The only absolute in fighting is that there are no absolutes. Anything can happen. But, I would not get in the ring with a professional fighter betting on that “anything” that could happen. It’s highly likely that, part of that “anything,” would involve my coach or Jesus slapping my cheek and telling me to wake up because the fight is over.
The better someone is at something, the easier that person makes it look. Writers know this all too well. What looks like it took thirty minutes to pen could have taken days. It’s the same with fighting. The pros make it look effortless. And because professional fighters fight other professional fighters, the difficulty of fighting is completely obscured by their expertise.
It’s tough to appreciate the skill of a professional fighter without experiencing it first hand. But…this video does a pretty decent job at showing you what I mean! Pay attention to not only what the pro does but the novices as well.
First, I hope you noted how fast Kryzystof, a.k.a. Ksos, moved. He avoided 25% or more of the punches just by movement. I think sometimes large fighters are thought of as slower. That is not the case. And, even if a heavy weight is a bit slower, his greater mass will compensate for the slower speed and still create a lot of force. (Blame Physics.)
Other than movement, Ksos avoided direct contact with simple techniques. Using his hands and forearms, he interrupted or redirected the punches. His movements weren’t big or flashy. He did just enough to get the job done.

He also put his hands on his face in a way that might not have seemed like much of a defense. In fact, it kinda resembled cowering. But, look again and notice that where Ksos put his hands on the sides of his head allowed his forearms to protect his jaws and neck. It’s a move sometimes called, “answering the phone.” Very smart. Very educated. Zero effort.

True professionals are efficient. They don’t perform complicated moves. They do the most with the least because being tired will get you knocked down, knocked out or worse.

Like most people, the folks facing Ksos were untrained. I applaud every one of them. Getting in the ring with somebody like Kryzystof is daunting. Knowing somebody won’t fight back doesn’t erase the fact that they could!
All of the novices knew they were being recorded. So, it stands to reason that they were doing their best. They could get fancy. They could be the fighter they always imagined that they could be. All they had to do was “unload.” Yet, they didn’t. Not one threw punches like machine gun fire. No one rushed Ksos or pushed him. Nobody tried to wipe his hands away from his face. I think only once or twice did anyone attempt to deliver an uppercut to his chin. And, as I said, only Briana made an effort to work his body. Why? Why didn’t they just go for it?
Although I’ve not spoken to any of these people and I have no idea what rules they were to abide by, I feel pretty sure I know the answer because I have been in their shoes. When you are new to fighting, you just plain don’t know what to do. And, even if you know a little about fighting, you don’t have enough experience to be able to work under the effects of adrenaline. So, you forget what little you know.
Unless your character has been taught to fight, he or she will look much like the people in this video. They won’t be throwing combos or flashy back fists. They may not even aim for the chin. Briana, my favorite, had to be coaxed into hitting Ksos. The heavyweight had to put his head down and tell her to hit it. That is very common. Even while sparring, folks will stop their punch just in front of the face or aim at the chest.

Your character will also tire quickly. The movement of fighting does not allow for a steady breathing pattern. They might even hold their breath. Sounds crazy, but it happens. Both scenarios deprive the body of a steady flow of oxygen and tire a combatant out. Quickly.

So, if you have a skill disparity, you have your hands full. But, it’s doable. The only limits of your work are the limits of your creativity. But, remember, your creativity must be credible. Regular folks off the street will not likely best a professional in hand-to-hand combat. But, “not likely” isn’t the same as “not ever.” Mwah ha ha ha.