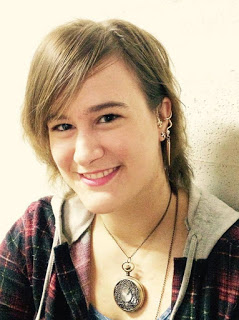 Our featured FightWriter Heather Titus asks: Can a character survive his throat being cut?
That is a very good question. And, I will counter it with a few of my own: Is the attack from the front or the back? And, what sort of knife is being used?  Both of those matter because each affects the answer.  Let’s tackle the latter first…firster. I like that better. We will tackle the latter firster.
Double-edged
The type of knife can determine the attack. Every weapon looks the way it does because it serves the most efficient use of the weapon. A double-edged blade can be used to slash, but it’s really great for stabbing. So, if someone has a double-edged blade and they know what they are doing, they may choose to stab rather than slash.
Single-edged
Single-edged blades are really great at slashing. Yes, they can stab. But, they excel at incised cuts. Someone wielding a single-edge knife might be more likely to slash. And while slashes can be long, they are not as deep as a stab. Bear in mind that any clothing around the area, the collar of a shirt or jacket, might further inhibit the depth of the slash or impede the slash altogether.
Attack from the front
The direction from which the attack comes will also affect the strike. An attack from the front, not done well, can be less of a surprise. The target may move too quickly or knock the blade away.
If the attacker has knife prowess, it might be better for him to stab than slash. A knife can be quickly drawn and a strike delivered before the target has a chance to process what is happening and defend. The victim may not even realize he has been stabbed. But, I’m not sure the neck would be the best area to attack. It would be far easier to go straight for the abdominal aorta.
From the back
From behind, a stab to the neck is fairly easy to accomplish provided the target is completely unaware and still. But, a stab to the base of the skull would be more productive and less messy than any slash.  HOWEVER, I’m sorry about all these buts and howevers, I spoke with Heather regarding the scenario she had in mind and she was considering a throat slash from behind.
Throat cuts from the back are common in action movies.  A character sneaks up behind his victim, then reaches around and covers the victim’s mouth to stifle any scream. The knife is then brought over the victim’s shoulder to the throat where the blade is pulled from under one ear to the other. Blood pours out in a smile shaped waterfall of red. Or black if it’s a black and white movie.
Truth is, colorful and dramatic as it might be, that sort of neck attack is really not the smartest way to kill somebody. Far too much can go wrong. First, when an attacker reaches around to cover the target’s mouth, he puts his forearm near to or in the path of the coming blade. He may cut himself worse than he does the target and/or inhibit the effectiveness of the knife strike. Also the victim can bite the attacker’s hand which may cause the attacker to drop the knife and/or cry out.
That mouth cover also gives the victim a moment to respond before the blade comes around. If the victim responds appropriately, he can guard his neck from the coming blade and/or trap the wielding hand.
For these very reasons, special forces from several countries are discouraged from performing a kill from the back with a throat cut (Grossman, 1995). Instead, they are instructed to do a kidney strike. The pain from such a puncture renders a victim mute and somewhat paralyzed while they bleed out.
But, let’s say that sort of neck strike happens. What are the repercussions? The best way to figure that out is to look at the neck and its structures. 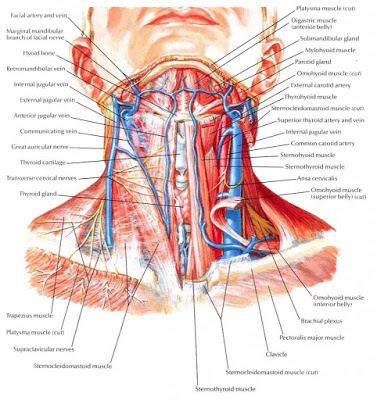 Yep, all of that is crammed into your neck. Here’s what happens when the major structures are injured.
Arteries / Large Veins –  This from PoliceMag.com:
Cuts to the neck and throat can cause rapid, high-volume blood loss. Deep horizontal slashes or multiple thrusts to the right side of the neck can sever the right common carotid artery or internal jugular vein. Cuts to the left side can sever the left common carotid artery. Be aware that both carotid arteries are well protected by several layers of muscle in the neck and are set deeper in the neck than the jugular. Creating an effective laceration in this area requires decisive force. Severing the carotid artery can cause unconsciousness, just like when using the carotid restraint. Thrusts or slashes to the front of the throat may damage the trachea (windpipe) or larynx (voicebox). Injuries to these areas are painful and will cause difficulty in breathing. (4)
Muscles – If a large muscle like the sternocleidomastoid is severed, the head will fall to the uninjured side. The victim will have to hold his head upright.
Thyroid – Slicing the thyroid will cause a great amount of bleeding. But, I didn’t find anything that said it would be enough to kill someone. What might kill a victim is injury to the parathyroid glands. The parathyroid glands regulate calcium levels in the blood. Without these glands, calcium levels can drop and cause cardiac arrest (3).
Trachea  – Cutting the trachea can disrupt the vacuum in the body that the diaphragm uses to pull in air.  With a big enough cut, the body will not be able to inhale and the victim will suffocate. Suffocation can take around three minutes but the victim will pass out sooner than that.  The cut can also cause air to leak into the neck and cause it to swell. That condition could cause a lung to collapse.
Vocal Cord Nerves – If either of the nerves that lead to the vocal cords are cut, there will be complete vocal paralysis. That doesn’t mean the victim can’t cry out. It means the voice will be breathy and hoarse.
To finally answer the question, can a character survive a throat cut: Yes, especially if appropriate trauma care and poor aim come into play.
Hockey goalie Clint Malarchuck survived a throat slash sustained by a stray skate. The team trainer reached into the wound and pinched the severed artery, effectively preserving the goalie’s life. He was back on the ice in ten days(1).
Actor Daniel Hoevels survived an on stage throat cut when someone replaced his prop knife with a proper knife. Thankfully, he missed major vessels. He was back on stage the next night because, you know, the show must go on(2).
Thank you so much, Heather for your question!
To learn more about Heather and her writing visit her site at   hatitus.com
Until the next round at FightWrite.net, get blood on your pages.
(1) http://www.dailymail.co.uk/sport/othersports/article-3005889/Clint-Malarchuk-bled-death-throat-cut-ice-tried-kill-twice-shocking-tale-survivor-sport-s-gruesome-injury.html
(2) https://www.theguardian.com/world/2008/dec/11/actor-slits-throat
(3) https://www.fauquierent.net/thyroidmass.htm
(4) http://www.policemag.com/channel/patrol/articles/2008/06/knife-targets.aspx