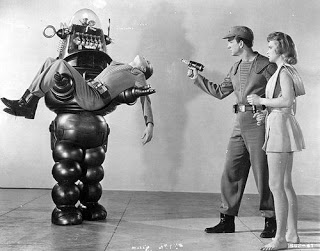 More than once an author has asked me how their character could beat a robot. And, they do so with a tone that suggests it’s impossible. Folks, what have I always said about fighting? There are no absolutes. That includes robots.

Ok, so let’s break this down. First, we need a clear picture of the thing. What is the robot designed to do? That will tell you about its physical build, strength, capabilities and programming. And, don’t make it a do-it-all robot that does construction work and performs surgery and can make a killer latte in its chest cavity. Give it a specific purpose and limitations like you would any human character.Next, rather than focusing on beating it, aim to best it. 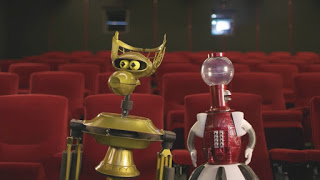 Robots are stronger and more resilient than humans. That’s kind of their thing. Muscling it doesn’t make sense. Find the thing’s weakness and exploit it. And, yes, it has to have a weakness otherwise the story is over.“Red lights flickered to a low glow then brightened, piercing the darkness. Activated, the robot scanned the room, identifying us all. Then it sat down and read a book because it knew we couldn’t defeat it. 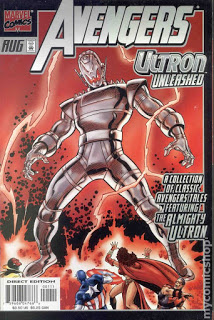 Folks, even Ultron could be defeated. Do not make your robot invincible. You have to be able to “vince” it. That should be the opposite of invincible: vincible. Or, if you like, Vince Vaugnable.
Sometimes, however, finding a weakness is difficult. Your character may not have that kind of time. In that case, I suggest the exact opposite. Use their strength to their undoing. Examine what makes them awesome and consider how it can be used to against them.I’m going to go over some basic characteristics of robots. I 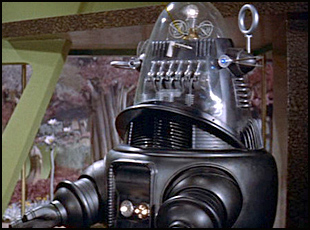 will point out how some might limit them. Others I will let you figure out. Then, you can decide how any can be used in your character’s favor. I don’t know the specifics of every story so listing all the possibilities is, in fact, impossible. What I can do is get you to look at the robot a little differently which might allow you to see options that you didn’t before. Any time I point out an attribute, look at the problem it presents for the robot.

Android – I’m going over this one first because it seems common. If a robot moves like a human, it can be taken down like a human. Don’t assume that it will be too heavy. It has to be similar in weight to a human or it wouldn’t be able to use human furniture. If it is especially heavy, it will be easier to trip. On that same note, once it hits the ground, it will have to right itself like a human which might be cumbersome depending on how it was resting. 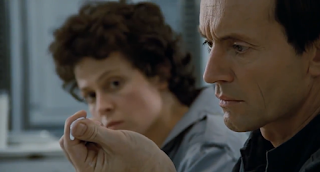 It will be also be vulnerable in the eyes and joints and damaging the throat will limit its communication. Turning its head all the way around won’t be possible because of the skin so its field of vision is limited. Lastly, it likely has a fluid necessary to function which means it can bleed. Think Bishop in Aliens. AI – I will address this now as androids are AIs. Artificial intelligence is not human intelligence. It is sensible and deliberate. It can only problem solve when the problem is clear and any solutions it comes to will be sensible. It will not choose a solution that makes no sense. It can reason but

using only what it has learned and there is no “deep learning.” It cannot recognize the hidden layers in a concept or the ethics of it. It will not change its course of action until a particular situation teaches it a new course. And again, that new course of action has to make sense. If its intelligence requires updates, then it can be hacked.Mobility – A robot’s mobility is perfect for its job and that may mean it’s on wheels. If that is the case, then its body is likely solid. Otherwise, bending in any direction might take it off balance. If it can’t bend, it can’t look under things or

access low items without telescoping features. Also, it is likely to be bottom heavy and wide for stability which might limit areas it can access. And, although wheels are very fast, they can’t maneuver a turn quickly – especially when they are moving quickly. Speed is a double-edged sword. The faster something is moving, the more hazardous it can be to be taken off course. Speaking of off course, robots on wheels have a tough time off road. Sometimes all it takes to best them is step off the sidewalk.

A robot in flight can be handled like a flying animal. It may

have difficulty flying in small or narrow places. And, as with wheels, its speed can be problematic.Telescoping features – Any time you lengthen something away from its center of mass, the structure is more unstable. Also, it’s easier to disable a small part of something rather than the whole.Power Source – Circuitry is the nervous system of a robot. Disrupt it and you disable the whole. To disrupt electronics, electricity has to flow across it in a way that it is not designed flow. 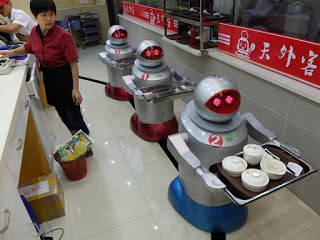 Non-AI – A non AI only does what it does. They’re a bit like zombies in that they are single minded. That’s not to say they can’t problem solve. It’s just that they can only solve problems they’re programmed to recognize. We’ve all seen enough movies to know that to get past a retinal scan, you just have to have the right eyeball in your hand. Why is that? Because the robot isn’t looking for what’s around the eye, only at the retina itself. The fact that the organ isn’t in a head isn’t a problem the software is designed to recognize or address. Which, by the way, is pretty stupid. As with AIs, non-AIs are susceptible to being hacked.

Armor/Weaponry – Both of these tend to add a good bit of weight. The heavier something is, the harder it is to get it moving. And, once it gets moving, the harder it is to stop it. That’s all because of inertia. The heavier something is, the greater the tendency it has to stay still. Once you get it moving, inertia will want it to continue in a straight line which makes quick turns an issue.
Multiple Robots – What’s worse than one robot? More than 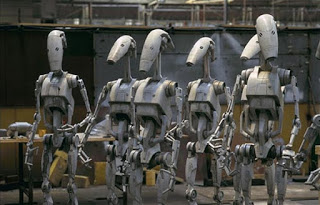 one! When dealing with a disparity of numbers, look for ways to even the odds. In my post The Site is Part of the Fight, I wrote about bottlenecking large numbers. That way, you only deal with as many as can fit through the bottleneck.

No, go forth, human and beat the robots! And, if you aren’t quite sure you can, there’s always Old Glory Insurance. (Pardon the 10 second commercial beforehand.)

And, because it does pertain to robots taking over and also because I can’t stop laughing about it… This is the moment you realize the robots have taken your job.